Yesterday as I was walking out of work, I pulled up Facebook to scroll through the top statuses. My daughter’s posts are usually are on top, if she’s posted something. I must look at her page often. She had posted something that said, “When faith replaces fear, then success will replace failure.”

It instantly convicted me. So much so that I had to choke back my tears.

As I was driving, I started to pray. I knew I was heading home and upon walking in the kid’s would want my attention, but I was feeling broken inside and I needed to process it.

And then I saw him. 3 cars up in traffic was my husband. He was also heading home from his morning plans. I knew it wasn’t a coincidence he just happened to be on the same road in the next town over, so I asked him to detour to the park so we could talk.

By the time we arrived, I was a crying mess. I shared with him the fear I’ve been living in and I wasn’t even aware.

For the past couple of months, I have been taking the online course for my real estate exam. It’s been very slow, as my time to give to it has been limited. But I decided I needed to get moving and get it done, and started focusing on it. My daughter had been helping me with flash cards, to prepare me for the tests.

And then I saw this video. It was a safety video made locally for real estate agents.The local agent, who I didn’t know, shared her story of success and busyness. She had been caught up in the day-to-day busyness of showing houses and appointments, when she received a call from a man who wanted to see a property she happened to be near. She decided to squeeze him in, between appointments and met him at this vacant property.

During that appointment, she was attacked and raped.

Raw emotions hit me. I’m sure everyone else watching could see me struggling to keep my composure. I could almost not function the rest of that day. And since, I haven’t cracked open my real estate book again to study.

In that moment, I chose fear and it immediately replaced faith, and I wasn’t even aware of it. 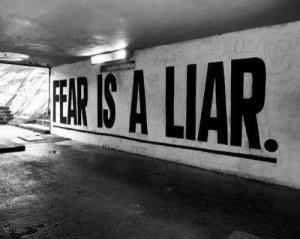 I know God takes care of his people. I truly know God cares for me. But I also know he’s allowed this kind of horrible crime to happen to me before and I don’t want to go through it again. So without knowing, I went into protection mode and quit studying. Unconsciously I convinced myself, if I never get licensed, I can stay safe.

But that’s not true. Nor is it trusting in God.

I know one day I’ll make one heck of a real estate agent when I’m ready to take that step. I have no doubt I’ll be a top producer in my entire area, but to be that successful, I have to have trust in the One who made me and has loved me to health.

We don’t normally go to church on Saturday nights, but due to scheduling conflicts we ended up there last night.

We sang a song in church that I’ve sang many times, with declaration and strength and belief. But last night, I couldn’t get the words out until I cried out and surrendered. The song is “Always” by Kristian Stanfill and some of the lyrics say this:

Oh, my God, He will not delay
My refuge and strength always
I will not fear, His promise is true
My God will come through always, always

Being a Christian doesn’t mean the journey will be easy. In fact, I would say it’s harder because it requires you to live differently from today’s culture. And it doesn’t mean that bad things won’t happen to you. Job in the Old Testament lost everything – literally – except his life. And he likely wanted to lose that after all he endured. But because of his perseverance and focus on God, Job was blessed ten times everything he had.

And this is God’s promise to me. And to you.

Last night in church, I laid down my fear. I will not be bound up in that any longer. It’s a liar and a break in my relationship with the One who loves me most.

Living in fear is a choice. Today I choose to allow faith to replace my fear in every decision I make, and I invite you to do the same, and then watch as success replaces failure.

I am madly in love with my soul mate and our five wonderful children, pursuing God's heart. View all posts by Amanda Lynn